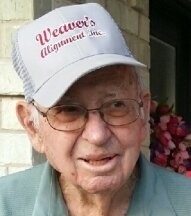 On Sunday, May 26, 2019, Keith DeWayne Jarvis passed away at the age of 91 at the long-term Nursing Home in Satanta, Kansas where he had resided for the last 10 months. He was born March 22, 1928, in a little home in Ransom, Kansas to William and Ethel Jarvis. He was the oldest. Later came Wilma, Ramona, and then Basil.

After graduating, from Arnold High School, he attended college at Kansas State University. He then worked for the Kansas State Highway Department. While working on the highway near Rolla, Kansas he attended a Park Day celebration where he met Beulah Renshaw. They were married in Garden City on July 16, 1950. They lived on the Renshaw Homestead and farmed the land. Soon this Homestead was filled with four children. Twins were born, Julia Gay and Jamie Rae, then Jon Mark and Lana Sue.

In the 50's, when the dust storms came, Keith moved his young family to Denver and worked as a carpenter. Here they resided for about 10 years. In Denver two young missionaries, Elder Means and Elder Frye, from The Church of Jesus Christ of Latter-Day Saints, knock on this young family's door and introduce them to the Gospel of Jesus Christ. Dad always said this was the most important decision he ever made and the greatest blessing to him and his family.

After 10 years in the city, the family moved back to Morton County, built a home in the sage brush, and went back to farming. Later he rented out the farm ground and worked for the Morton County Road Department.

He enjoyed hunting, fishing, flying, attending farm, livestock sales, watching thunderstorms, listening to polka music and and being around his 5 grandchildren; Clark, Stacie, Shad, Brandon, and Jenny and their families.

Keith was preceded in death by his wife Beulah, son, Mark, daughter, Jamie and sister Wilma. He leaves behind his sister, Monie and her husband, Charles, brother, Basil, 2 daughters, Julie and Lana, daughter-in-law, Terri Jarvis, 5 grandchildren and 21 great grandchildren.

The viewing will be on Friday, May 31st at the Robson Funeral Home in Hugoton, Kansas, from 10 AM to 8 PM and with family there to visit between 6:00-8:00. Funeral services will be Saturday, June 1st at 10:00 a.m. at The Church of Jesus Christ of Latter-Day Saints in Hugoton, Kansas with President Poulsen presiding. Burial will follow at the Richfield Cemetery, Richfield, Kansas.

In lieu of flowers, donations to the family may be sent to the Robson Funeral Home, Box 236, Hugoton, Kansas, 67951.
To order memorial trees or send flowers to the family in memory of Keith DeWayne Jarvis, please visit our flower store.

Family will be at the funeral home on Friday evening from 6 PM to 8 PM.