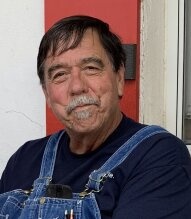 Kenneth Lynn Sullivan, 67, lifetime resident of Stevens County passed away Thursday, December 16, 2021, at his home. The son of Loren Kenneth and Lois Marie (Rawlins) Sullivan, he was born March 5, 1954, in Hugoton, Kansas.

Kenneth graduated from Rolla High School in 1972. He later enjoyed being in agriculture by driving semi-trucks and having cattle. Kenneth enjoyed camping with his family.

He is preceded in death by his parents and daughter, Morgan Sullivan.

A memorial has been established for Pheasant Heaven Charities. In the care of Robson Funeral Home, P.O. Box 236, Hugoton, Kansas 67951.

The funeral service will be held Tuesday, December 21, 2021, at 10 AM, Hugoton Church of Christ. Burial to follow at Hugoton Cemetery.

Robson Funeral Home, Hugoton is in charge of arrangements.
To order memorial trees or send flowers to the family in memory of Kenneth Lynn Sullivan, please visit our flower store.