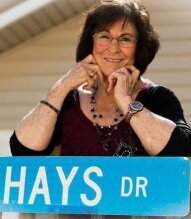 Lila Lee (Goodnight) Hays, a woman of unprecedented beauty, grace, and faith, passed away on August 23, 2021, at Pioneer Manor in Hugoton, Kansas.

Lila was born on March 18, 1935, at home in Englewood, Kansas, where she was welcomed by her parents, Iona Grace (McKinney) Goodnight and O.G. Goodnight, and her five brothers. Lila attended school in Englewood until she left to obtain her bachelor’s degree in Education from Northwestern Oklahoma University, in Alva. One day while working in the cafeteria at the college, a handsome young Walter Neill Hays asked Lila out on a date. Neill noted that Lila would have to pay because he didn’t have any money. Lila said, “Lucky for you I just got paid today.” Neill thankfully agreed, and so began the couple’s journey toward five children and 58 years of marriage. Lila’s greatest joy came from spending time with her 15 grandchildren and 11 great-grandchildren, who knew her as “Grammy Lila.”

Lila’s first teaching job out of college was at Avard, Oklahoma when she and Neill were 21 years old. After teaching in Deerfield, Kansas and Rosston, Oklahoma, Neill and Lila made Rolla, Kansas their home starting in 1960. Lila taught in Rolla for 31 years until her retirement in 1993. The Hays Family both experienced and fostered a life of love and community in Rolla.

Although she considered many folks family, Lila’s immediate family who survive her are her sons Brent and wife Jan of Mineral Wells, TX, Brad and wife Jeanne of Bristow, OK, Bart and wife Rhonda of Bristow, OK, Brock and wife Katie of Rifle, CO, her daughter, Becki Richardson and husband Rex of Elkhart, KS, and her brother Olis Goodnight and wife Shirley of Englewood, KS. Lila’s brothers A.G., Don, Ron, and Johnny preceded her in death.

A celebration of Lila’s life will be held on Friday, August 27, 2021, at 1:00 p.m. at the United Methodist Church in Rolla, Kansas. The church will open at 10:30 a.m. for family and friends to gather. The family will immediately leave after the service to travel to Englewood, Kansas for a graveside service at 4:00 p.m.

The family is eternally thankful for the wonderful care Lila received at Pioneer Manor.

Lila believed that Jesus was her Lord and Savior, and she prepared a Bible for each of her children. In one of the Bibles, she wrote “Our primary reason for living in this world is to reflect the likeness of Christ Jesus!” In her own beautiful, graceful way, Lila did just that!
To order memorial trees or send flowers to the family in memory of Lila Lee Hays (Goodnight), please visit our flower store.