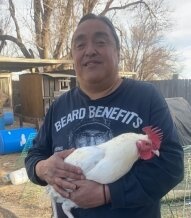 The son of Martin C. Herrera and Lidia (Guerra)Herrera. He was born May 6, 1970, in Brownfield, Texas.

Martin was a very loving man. He enjoyed being with his family and friends. He raised his children and helped with his nieces, nephews, grandchildren, great-nieces, and great-nephews. He helped everyone out of love. Martin had a hobby raising Roosters.

Martin was preceded in death by his parents.

In Lieu of flowers, a memorial was established for Martin Herrera III Education Fund for his grandchildren.
Memorials may be mailed to Robson Funeral Home, 218 S. Main St., Ulysses, Kansas.

Funeral Services will be held in Brownfield, Texas. The arrangements are pending.
To order memorial trees or send flowers to the family in memory of Martin G. Herrera III, please visit our flower store.