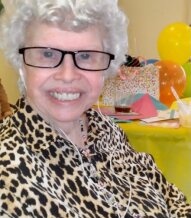 Mary Lou Cullison was born in Dodge City, Kansas to Dorothy Frances Light (Hancock) Cullison on April 6th,1945. Mary Lou's Father was killed fighting in WWII before she was born. J.I. Cullison married Dorthy on July 4, 1946 and adopted Mary Lou as his own. Mary Lou passed away June 30, 2021, Stevens County Hospital. She was 76 years old.

Mary Lou enjoyed being with her family and going on vacations with them. She had a contagious laugh, and everyone made it a point to give her something to laugh about. Her favorite hobby was counting. She counted and separated colorful beads, but collecting quarters was her favorite thing to count; and she let everyone know it. She was rich in quarters! She also loved playing ‘blackout’ bingo and working on hooked rugs.

Mary Lou moved to SDSI in Garden City in 1987, and later to SDSI in Liberal. She spent 8 years working from a group home and enjoyed “being on her own” during these years. In 1995, Mary came home to live with brother Jimmy, rotating her visiting time by also staying with her sisters Kay and Patty. Mary enjoyed going to ball games and sharing in each family’s individual activities. It was a busy life for Mary Lou during those years.

In 2003, Mary wanted to strike out on her own again and she went to live in Dodge City at Sterling House. In 2013, the family moved her closer to home where she took up residence at Pioneer Manor in Hugoton, Kansas. There she lived until her death. In all her adventures, Mary Lou loved Pioneer Manor the most.

A memorial has been established for Pioneer Manor Nursing Home. Memorials may be mailed to Robson Funeral Home, P.O. Box 236, Hugoton, Kansas 67951.

To order memorial trees or send flowers to the family in memory of Mary Lou Cullison, please visit our flower store.