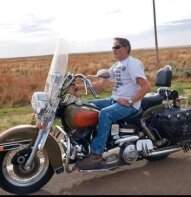 Max was born to Augustus Lee and Lois Christine (Bloodhart) Walsh. He was born on October 19, 1946 in Elkhart.

He and Candy Marie Davis got married July 21, 1989 in Elkhart. They recently celebrated 30 years of marriage.

Max very much enjoyed his Harley Davidson motorcycle, he loved going on rides around the area. He also took great pride of doing wood working and taking care of his yard. He collected different kinds of knives. He enjoyed being around his family and took great pride in them.

Max was preceded in death by his parents and daughter, MeShell Flower.

A memorial has been established for the family, make checks payable to Candy Walsh. Memorials may be mailed to Robson Funeral Home, P.O. Box 606, Elkhart, KS 67950.

No public viewing will be held.

Robson Funeral Home, Elkhart is in charge of arrangements.
To order memorial trees or send flowers to the family in memory of Max Allen Walsh, please visit our flower store.