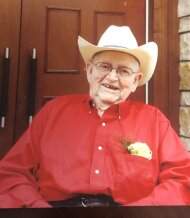 Melvin was a very active member in his community and within his church. He was member of American Legion, Farm Bureau Association, Moscow United Methodist Church, and Pioneer Electric Board. He was on USD 209’s Board of Education for many years while his boys were in school. He was a Stevens County Commissioner and Mayor of Moscow. He was a City Councilmen for Moscow. He enjoyed being a farmer and raising any crop that would grow. His first love was cows and raising them.

Robson Funeral Home, Hugoton is in charge of arrangements.
To order memorial trees or send flowers to the family in memory of Melvin Hardy Webb, please visit our flower store.

Graveside service will be held before the church service.