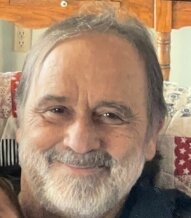 He was the son of Loren Kenneth and Lois Marie (Rawlins) Sullivan. He was born January 24, 1956, Hugoton, Kansas.

He was a member of the My Father’s House Church in Hugoton. Michael enjoyed his church and his church family. Hobbies included fixing vehicles and shooting guns. He loved spending time with his family.
He was preceded in death by his parents; brother, Kenny Sullivan; and infant niece, Morgan Sullivan.

A memorial has been established for My Father’s House Church or Wounded Warriors. In care of Robson Funeral Home, P.O. Box 236, Hugoton, Kansas 67951.

Robson Funeral Home, Hugoton is in charge of arrangements.
To order memorial trees or send flowers to the family in memory of Michael Keith Sullivan, please visit our flower store.