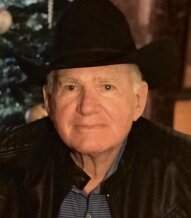 Gary was born in Thief River Falls, MN to Oscar and Eunice Mostrom. However, he arrived while Oscar was overseas in World War II and did not meet his father until he was 3 years old. Oscar brought candy and won his heart immediately. Eventually the family moved to Wichita, KS.

In January 1960, when Gary was only 17, he joined the United States Navy and was based on the USS Bon Homme Richard, where he earned the nickname Boz. He also met his lifelong friend, Gary Porter, who eventually introduced him to the love of his life. After the Navy, Gary became a firefighter in Wichita, KS.

In August 1964 Gary met Ginger Phifer in Wichita, and they were married on February 20, 1965 in Hugoton, KS at the United Methodist Church. It was after this, that he discovered his love of farming. Oh, what joy they shared raising their four daughters and working the land. God created Gary to be a farmer and he loved the land that was entrusted to his care. He modeled for his family the importance of working hard, playing hard, and being thankful to God for his blessings. Sundays were for church and family - even during harvest.

Gary retired from farming in 2003. He loved classic cars, good music, and golfing. He and Ginger enjoyed traveling together through this country that he loved, looking at the grain growing in the fields, and spending time with his daughters and their families. He and Ginger shared a love that was precious and rare.

He was preceded in death by his father, Oscar Mostrom; mother, Eunice Mostrom; and a brother, Errol Mostrom.

Services will be held on Monday, May 10, 2021, at 10:30 AM at the First Christian Church, Hugoton with Heath Kelley presiding. Burial will follow at Hugoton Cemetery.

Robson Funeral Home, Hugoton is in charge of arrangements.
To order memorial trees or send flowers to the family in memory of Oscar Gary Mostrom, please visit our flower store.