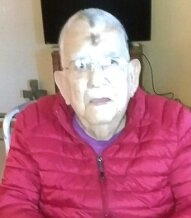 A rosary will be prayed at 10 A.M. Saturday, August 6, 2022, followed by Mass of Christian Burial at 10:30 A.M. at St. Mary’s Catholic Church. Burial to follow immediately at Deerfield Cemetery, in Deerfield, Kansas.
A memorial has been established for St. Mary's Catholic School, in the care of Robson Funeral Home, 620 N. Main Street, Garden City, Kansas 67846.

Paul was a self-employed painter, he owned and operated Paul’s Painting and Décor. Paul was a devoted member of St. Mary’s Catholic Church, Knights of Columbus, and a member of the Cursillo. He enjoyed gardening, fishing, and reading his bible.

Robson Funeral Home, Garden City is overseeing the arrangements.
To order memorial trees or send flowers to the family in memory of Paul O. Lopez, please visit our flower store.