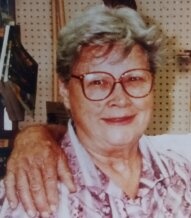 Priscilla (Sparks) Stevens, 95 years old, passed away Wednesday, May 18, 2022, at Stevens County Hospital, in Hugoton, Kansas. The daughter of Lester and Amy (Sanborn) Sparks, she was born April 5, 1927, in Elkhart, Kansas.

She was a lifetime resident of Stevens County. Priscilla was a member of the Hugoton Baptist Church.

A memorial has been established for the Hugoton Baptist Church. In the care of Robson Funeral Home, P.O. Box 236, Hugoton, Kansas 67951.

Funeral service will be held Monday, May 23, 2022, at 10 AM, Hugoton Baptist Church with Pastor Gary Stafford presiding. Burial to follow at Hugoton Cemetery, Hugoton, Kansas.

Robson Funeral Home, Hugoton is overseeing the arrangements.
To order memorial trees or send flowers to the family in memory of Priscilla Stevens, please visit our flower store.