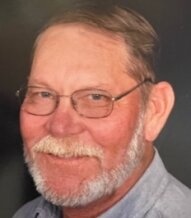 The son of Ray Emery Davis Sr. and Goldie (Calkins) Davis and he was born on December 9, 1953, in Jamestown, North Dakota.

Ray and Wanda Jean Hutchison were married on April 27, 1974, in Logan, Kansas.

Ray was a member of United Methodist Church, Elkhart, Kansas. Ray's hobbies were hunting, fishing, reading, and working outside and in the garage.

A memorial has been established for the Wounded Warriors. Memorials may be mailed to Robson Funeral Home, P.O. Box 606, Elkhart, KS 67850.

The memorial service will be held Thursday, May 19, 2022, at 10 AM at United Methodist Church, Elkhart, Kansas with David Eckert and Jerry Ryman presiding. Burial following at Elkhart Cemetery, Elkhart, Kansas.

Robson Funeral Home, Elkhart is in charge of arrangements.
To order memorial trees or send flowers to the family in memory of Ray Emery Davis, please visit our flower store.