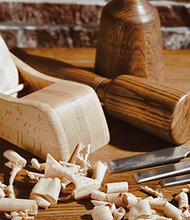 Ricky L. Wasinger, 55, of Garden City, KS passed away unexpectedly, Saturday, July 9, 2022, at St. Catherine’s Hospital. The family will hold a private celebration of Ricky’s s life at a later date; he will be laid in the columbarium at Valley View Cemetery in Garden City. The family suggests memorial contributions in Ricky’s honor be made to Robson Funeral Home, 620 N. Main Street, Garden City, KS 67846.

Ricky was born May 8, 1967, to the late Leo and Louise (Brungardt) Wasinger in Garden City, Kansas.
Ricky worked for Tim and Jerri’s Auto Sales as a mechanic, however, his true passion was woodworking. He was very talented and could create anything imaginable out of wood.

Ricky is preceded in death by his parents, and sister, Mary Davis.

He is survived by his sisters, Vicki Galliart and husband Steve; Michele Wasinger and Rob Webb; his brothers Gary Wasinger and wife Shirley; Tim Wasinger.