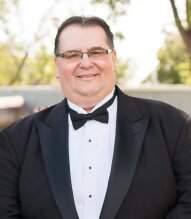 Robert "Bubba" S. Carranza, 44, passed away peacefully at his home on April 25, 2019, after being weakened by his kryptonite, a flesh-eating bacteria, which made it harder for him to fight the villains - diabetes, kidney failure, blindness, and amputation. Although Bubba overcame many villains, he eventually fell to Doomsday.

Though civilians will best recognize him as "Superman," his family knew him as a big-hearted, kind man who loved to help others. Bubba was a comic book and movie fanatic, champion of trivia and an avid gamer. He enjoyed movie dates with his many cousins and was also the forefather of Uber to many of his friends. Bubba was loved by everyone and will be greatly missed.

He was born September 3, 1974, in Flint, Michigan to Robert Carranza and Stella Carranza. As a young boy, Bubba discovered his super strength came from McDonald's Big Macs and french fries, costing his mother many trips to town. During high school, Bubba participated in FFA and shop, often crafting special effects props. This is also around the time he discovered his superhuman abilities to protect peers from bullies. After graduating from Holcomb High School in 1994 Bubba attended Southwest Technical School in Liberal, Kansas to pursue a certificate in welding.
Prior to his decline in health, he worked in the oil field for Eldredge Well Service as shop foreman for more than 20 years. He was a member of Satanta First Baptist Church where he used his artistic skills to bless various ministries. This is also where he refined many of his superpowers ...1) his ability to remain positive and uplifting despite his villains, and 2) encouraging those around him. Bubba even helped those who helped him by bringing them closer to God. He was often heard saying, "Why do people feel the need to be so grumpy?!"

He is survived by Stella Carranza, mother, of Satanta; James Edward Carranza, brother, and wife, Brooke, and their children, of Satanta; David and Penny Thacker, of Satanta; grandfather, Ray and Norma VanZant of Ulysses; and many nieces, nephews, and cousins.

He was preceded in death by his grandparents, Bill Meadows, Hazel VanZant, Bart Eldredge and niece, Cherokee Stoffers.

A service will be held on May 4, 2019, at Satanta Baptist Church, 101 Apache St., Satanta, Kansas at 10 a.m. Burial to follow immediately at the Moscow Cemetery. There will be a Celebration of Life following the burial at Satanta Community building on Pawnee St.

A memorial has been established for First Baptist Church, Satanta, in honor of his name. Memorials may be mailed to Robson Funeral Home, P.O. Box 747, Satanta, KS 67870.

But wait.....that's not the end! Thanks to a kryptonian regeneration armor crafted when Bubba accepted Jesus as his Lord and Savior on May 21, 2001, Doomsday didn't actually defeat Bubba. He is alive and well walking the streets of gold in a place called Heaven.

Robson Funeral Home, Satanta is in charge of arrangements.
To order memorial trees or send flowers to the family in memory of Robert Sebastin ""Bubba"" Carranza, please visit our flower store.