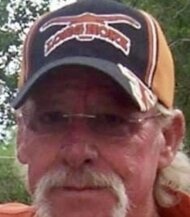 Robert and Gloria Herrera were married February 18, 1977, in Texline, Texas. To this union were three children, Josh, Kristi, and Jayme.

Robert enjoyed being with his family and friends. He loved to have his grandchildren over to visit or watch television with them. Robert was very close with his brother-in-laws, sister-in-laws, nieces, and nephews. His hobbies were fishing, hunting, and trapping.

He was preceded in death by his parents and brother, Donald “Chigger” Evans.

A memorial has been established for St. Jude’s Children’s Hospital. In the care of Robson Funeral Home, P.O. Box 236, Hugoton, Kansas 67951.

Memorial service will be held Friday, June 17, 2022, at 10 AM, at Robson Funeral Home, Hugoton. Burial to follow at Hugoton Cemetery, Hugoton, Kansas.

Robson Funeral Home, Hugoton is overseeing the arrangements.
To order memorial trees or send flowers to the family in memory of Robert Lee Evans, please visit our flower store.