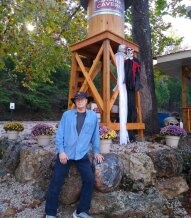 Reece was the son of Ronnie Clark and Vivian Ann (Smith) Robinson. He was born on August 13, 1955 in Amarillo, TX.

Reece and Kay Lynne Molder were married on July 6, 1973 at Lelia Lake, TX. To this union were four children Adam, Clint, Diane and Elaine. Hugoton became their home in 1988 raising their 4 children and loving their grandchildren and great grandchildren. He was a carpenter for many years. The last 18 years he has been working for Hi-Plains Lumber, Hugoton.

Reece enjoyed traveling with family. As a family they went on vacations and went fishing and enjoyed their trips. Reece always had a project he was working on.

Memorial has been established for Pheasant Heaven Charities. Memorials may be mailed to Robson Funeral Home, P.O. Box 236, Hugoton, KS 67951.

Public Graveside service will be held on Monday, February 1, 2021 at 2 P.M. at Hugoton Cemetery, Hugoton, KS with Pastor Tim Singer.

Robson Funeral Home is in charge of arrangements.

To order memorial trees or send flowers to the family in memory of Robert Maurice "Reece" McDaniels, please visit our flower store.