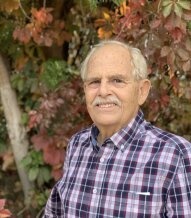 Roger Earl Lynch passed away on January 21, 2021 at his home in rural Stevens County surrounded by his family. He battled cancer for over 18 years.

Roger was born in Garden City, Kansas on August 20, 1947 to Cecil Earl and Dorothy Virginia (Stapleton) Lynch. He was raised on the family farm south of Hugoton. Roger graduated from Hugoton High School in 1966. He attended Garden City Community College and graduated from Fort Hays State University with a Bachelor of Science and Masters of Science degrees. He also attended the University of Florida.

Roger was a member of the First Baptist Church of Hugoton, KS where he served as a Deacon for many years.

In May 1976, Roger met the love of his life, Judy Ann Williamson. Roger was attending a dance at the VFW Hall where he saw Judy. She was not looking for a date that night or any other night for that matter, but it was love at first sight and Roger managed to get Judy’s phone number on a paper plate. That event set the stage for the next 44 years. Roger and Judy were married on August 28, 1976 at the First Baptist Church in Rolla, Kansas. They made their home on the family farm south of Hugoton. In 1978, JoHanna Renee was born and in 1980, Sheena Jolene was born.

In his career, Roger was a Recreational Art Therapist for the University Hospital of Jacksonville, Florida, a farmer and self-made business man. He taught school for many years both as a teacher and then as a substitute in both Liberal and Hugoton school districts. He was passionate about helping children. He loved having the opportunity to see his grandkids in school.

Roger was a very talented artist. He loved spray paint art work and sculpting with metal. He made his own Christmas cards for several years. More than anything he adored his family. He was known as Grandpa to Logan, Shiloh, Ainsley, Quinn, Ryder and Rowdy. Roger loved the summertime and soaking in the summer sun by the pool that he and Judy built themselves. He loved auto racing and one of his greatest memories was traveling to the Indianapolis 500 with Robert. He was a strong supporter of the Hugoton Eagles and the FFA. He was the strength of the family, a loving man and a faithful Christian.

Roger is survived by his wife of 44 years, Judy Lynch, of the home and son Robert Lynch and wife Heather, of Apex, North Carolina, daughters JoHanna Goetzinger, of Hugoton, Kansas and Sheena Schmutz and husband Jason of Derby, Kansas. Grandchildren: Logan and Shiloh Goetzinger, Ainsley and Quinn Lynch and Ryder and Rowdy Schmutz. Sister Janet Sutton and numerous nieces and nephews.

Roger is preceded in death by his parents and brother Gary Dean Lynch.

My dearest Judy,
You made my life complete with our children and grandchildren. I fell in love with you the minute that I saw you on the dance floor. Judy, I am so very proud of the way ours kids have turned out and it is all because of you. Judy, you are the very best mother that a man could want in life. Thank you for coming into my life. I will always love you to the moon and back. Judy, always remember that I respect you, I adore you, I will always cherish you and I love you my sweetheart baby doll.
Always yours, Roger.

A memorial has been established for the Hugoton High School FFA. Memorials may be mailed to Robson Funeral Home, PO Box 236, Hugoton, KS 67951.

Robson Funeral Home, Hugoton is in charge of arrangements.
To order memorial trees or send flowers to the family in memory of Roger Lynch, please visit our flower store.

Family will receive friends and family from 5 P.M. to 7 P.M. at Robson Funeral Home, Hugoton.