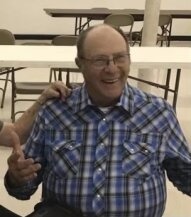 Roger Lynn McGill, 81, passed away from this life on Wednesday, April 20, 2022, at Stevens County Hospital, in Hugoton, Kansas.

Roger married Eva Marie Peterson on September 15, 1984, in Moscow, Kansas. Their love for one another was undeniable. They shared many passions and one thing they didn’t miss a beat on was going to church together. They were faithful members of Hugoton Church of Christ. Eva preceded him in death on December 4, 2020.

Roger graduated from Moscow High School. Later, he was the owner of R & S Siding and then went on to work for Bultman Inc.

His hobbies included fishing, planting tomatoes, and spending time with his family.

He was preceded by his parents; his wife, Eva Marie; his son, David Scott Webber.

A memorial has been established for the New Mexico Children's Home. In the care of Robson Funeral Home, P.O. Box 236, Hugoton, Kansas 67951.

The funeral service will be held Monday, April 25, 2022, at 2 PM, at Hugoton Church of Christ, in Hugoton, Kansas with Mike Hershey presiding. Burial to follow at Hugoton Cemetery.