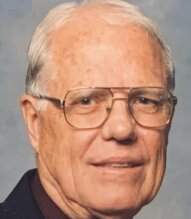 He was born August 31, 1933 in Noble, Oklahoma to Ovie Clarence and Mildred Viola (Poole) Reed.

Ronald Reed and Temple Hurd were married September 11, 1953 in Udall, Kansas. To this union were three children; Mike, Greg and Kathy.

He attended Oklahoma University on a track scholarship and had a very successful collegiate career at OU. That is where he got his Bachelor's Degree in Industrial Education. He got his Masters of Teaching from Southwestern State College. Then he became Mr. Reed was what the kids called him at Rolla High School where he was a school teacher and counselor. Ron began teaching in August of 1961 and retired in May of 1993. Ron was active in the Rolla community and with schools. They were a part of Rolla Booster Club, Rolla Lions Club, and United Methodist Church.

He was preceded in death by his beloved wife, Temple Lee; parents, Ovie and Mildred; brothers, Darrell and Donald Reed; sister, Betty Yoder.

A memorial has been established for Rolla Hope and Rolla Lions Club. Memorials may be mailed to Robson Funeral Home, P.O. Box 236, Hugoton, KS 67951.

A private Graveside will be held for the family. Memorial service, Friday, June 5, 2020, 10 AM. at the Ron Reed Track and Field at Rolla High School. Social distancing should be utilized for people in attendance for safety.

Robson Funeral Home, Hugoton is in charge of arrangements.
To order memorial trees or send flowers to the family in memory of Ronald Cordell Reed, please visit our flower store.