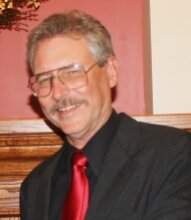 He entered this world on October 6, 1957, in Des Moines, IA, born to Irvin and Betty (Wittenburg) Rindels.

He and Susan Kathleen Goats married April 4, 1980, in Las Vegas, Nevada. She preceded him in death on August 13, 2016. To this union were four children: Tyler, Tanner, Taylor, and Tessa.

Ron graduated from Hugoton High School in 1975. He loved to play pool and was good at it too. He liked to fish, and coach his kid’s baseball teams with his wife, Susan. He enjoyed his children and grandchildren very much.

He was preceded in death by his loving wife, Susan; his parents, Irvin and Betty Lou; brother, Mike Rindels; nephew, Eric Knox.

Robson Funeral Home, Hugoton is in charge of arrangements.
To order memorial trees or send flowers to the family in memory of Ronald James Rindels, please visit our flower store.