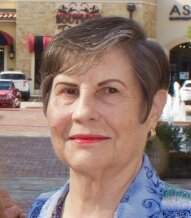 Sharon was born to Wayne and Lenora (Wilkins) Blaylock on August 10, 1941, Mancado, KS.

Gary Dean and Sharon Lynn Blaylock were married October 22, 1960. To this union were two sons, Kelly and Kent.

Sharon was a housewife to Gary and a mother to the boys. She enjoyed being a mom and a grandma. Her greatest joy was being with her family and she loved them all dearly.

Sharon was preceded in death by her parents and husband.

A memorial has been established for United Methodist Church of Hugoton. Memorials may be mailed to Robson Funeral Home, P.O. Box 236, Hugoton, KS 67951.

Funeral service will be held Thursday, September 19, 2019, at 10 AM, United Methodist Church, Hugoton. Burial to follow the service at Hugoton Cemetery.

Robson Funeral Home, Hugoton is in charge of arrangements.
To order memorial trees or send flowers to the family in memory of Sharon Lynn Lynch (Blaylock), please visit our flower store.