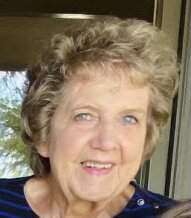 Shirley Gayle (Davis) May, 85, went home to be with Jesus Tuesday, February 8, 2022, at her residence in Moscow, Kansas.

She was born April 3, 1936, in Tulia, Texas. Later, she attended West Texas State College in Canyon, Texas, receiving her Bachelor's degree in elementary education. Shirley began her teaching career in Liberal, KS, where she met her husband. Shirley and Eldon “Tub” May were married on December 21, 1957, and made their home in Moscow. Eldon preceded her in death on November 6, 2001.

In addition to being an active partner on the farm, Shirley worked for Moscow Public Schools for over 40 years as a Kindergarten and First Grade teacher, and later as a reading specialist. She retired from teaching (only due to health reasons) at 80 years old. Her professional career was a huge part of her life. She loved teaching, loved the kids, and loved being a part of their lives as they became adults. She will forever be remembered fondly as Mrs. May.

Shirley enjoyed all things family and being together with them. She was known for her fabulous meals and desserts and loved to cook all of her family their favorite things. She also took great pride in her yard and continued to keep the mowing to herself. She offered support to everyone, no matter what they were doing. Shirley had the most positive attitude - even in the worst of times. She could find the good in everything, and everyone. She was the first person to offer help to anyone that needed it - a true golden soul. Her family was her light, and she was their angel and rock...their Forever Valentine. Shirley's famous saying to her family: “I Love You a Bushel and a Peck."

She was preceded in death by her grandfather, Claude E. Davis, son, James Douglas May, and daughter, Shari Janette May.

A memorial has been established for the Pheasant Heaven Charities or St. Jude Children Hospital in the care of Robson Funeral Home, P.O. Box 236, Hugoton, Kansas 67951.

Robson Funeral Home, Hugoton is in charge of arrangements.
To order memorial trees or send flowers to the family in memory of Shirley Gayle May (Davis), please visit our flower store.