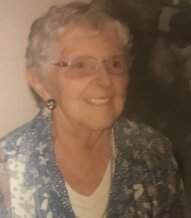 She was born to Walter L. and Marguerite (Ryan) Whitcomb on October 16, 1922, Berwyn, Illinois.

Shirley married Leonard Bryan in the summer of 1947. Later she married Dave Rome, and he preceded her in death.

She served in the US Navy during War War II and was stationed in Salt Lake City, Utah.

Shirley was a member of Episcopal Church. She enjoyed spending time with her children and grandchildren and she loved them deeply.

She was preceded in death by her parents, son, David Allen Bryan; grandson, Zachary Trindle and son-in-law, Warren Trindle.

A memorial has been established to St. Jude’s Hospital. Memorials may be mailed to Robson Funeral Home, PO Box 236, Hugoton, Kansas 67951.

Funeral Service will be held on Thursday, August 6, 2020, 10 AM, at Robson Funeral Home, Hugoton. Burial following at Kingfisher Cemetery, Kingfisher, Oklahoma at 3:30 PM.

There will be no public visitation.

Robson Funeral Home, Hugoton is in charge of arrangements.
To order memorial trees or send flowers to the family in memory of Shirley E. Rome (Whitcomb), please visit our flower store.