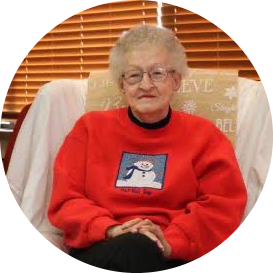 Hand delivered by a local florist

The daughter of Oscar and Irene Woolery (Inman) and she was born on January 22, 1942, in Mullinville, Kansas.

Shirley and John Edward Keener were married on June 25, 1960, in Mullinville, Kansas. They were married for 54 years and he preceded her in death on June 19, 2014. To this union were three daughters Caren, Carmen, and Carla.

She loved and enjoyed her children and grandchildren.  Shirley was a daycare provider for a lot of children in Satanta.  She was an avid Dallas Cowboys and Kansas Jayhawk fan. Shirley enjoyed watching any kind of sports and working in the yard with her flowers.

She was preceded by her parents; daughter, Carla Darbro; brothers, Glenn, Max, and David.

A memorial has been established for the St. Jude’s Children’s Hospital. In the care of Robson Funeral Home, P.O. Box 747, Satanta, KS 67870.

To order memorial trees or send flowers to the family in memory of Shirley Jean (Woolery) Keener, please visit our flower store.

The family will receive friends and family on Monday from 5 PM to 7 Pm at Robson Funeral Home.