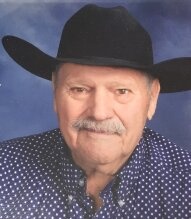 Terry and Carol Jane Sutton were married on June 14, 1959 at First Christian Church, Hugoton, KS. Carol preceded him in death on September 28, 2014. To this union were two children Cheryl and Gentry.

He grew up in the Lone Star Friends Church and later attended the First Christian Church, Hugoton.

Terry was a farmer and a rancher for many years. He enjoyed taking his children to their rodeos and camping with them. He loved to travel with his family and friends. Later, his special friend Donita they enjoyed going to lunch and church together.

He was preceded in death by his parents, a brother, Eugene Campbell, a sister, Yvonne Carlise.

The memorial has been established for Pheasant Heaven Charities, Hugoton. Memorials may be mailed to Robson Funeral Home-P.O. Box 236-Hugoton, KS. 67951.

Friends may call Sunday 2 PM to 8 PM and Monday 10 AM to 8 PM at the Robson Funeral Home, Hugoton.

Robson Funeral Home, Hugoton is in charge of arrangements.
To order memorial trees or send flowers to the family in memory of Terry Neil Campbell, please visit our flower store.