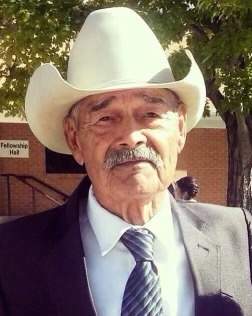 Trinidad Aranda, 94 years old, passed away on Friday, August 19, 2022, at BSA Hospice of the Southwest, in Amarillo, Texas.

He was born to Lucas and Simona (Hernandez) Aranda on June 26, 1928, in Alamos Sn. Anto, Manuel Benavides, Chihuahua.

Trinidad came over as a ranch hand from Mexico to America at an early age.

He and Maria Morales were married on December 15, 1951, in San Pedro, Chihuahua, Mexico. To this union were ten children: Oralia, Jesse, Fred, Manuel, Trinidad Jr., Domingo, Armida, Oscar, Norma, and Raymon. Maria was the love of his life, and they enjoyed each other’s company. He missed her through and through after she passed away. They were married for 68 years until she preceded him in death on November 16, 2020.

He worked as a ranch and farm hand in various parts of the United States for many years. Trinidad never met a stranger and was bigger than life. He was enjoyed by all that met him and were around him. He was a generous and knowledgeable man along with an avid storyteller and was so loved by everyone he encountered. His relationship with tequila was never on the rocks.

He was preceded by his parents; loving wife, Maria Aranda; three children, Oralia, Manuel, and Oscarito; and 14 siblings. He was the last of the living family of the Hernandez Aranda dynasty.

A memorial has been established for the BSA Hospice Foundation of Amarillo, in the care of Robson Funeral Home, P.O. Box 606, Elkhart, Kansas 67950.

Funeral Mass will be held on Wednesday, August 24, 2022, at 10 A.M., at St. Joan Arc of Catholic Church with Father Rudin Din officiating. Burial to follow at Elkhart Cemetery, Elkhart, Kansas.

To order memorial trees or send flowers to the family in memory of Trinidad H. Aranda, please visit our flower store.