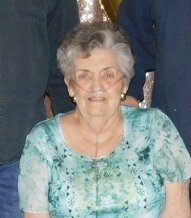 Growing up during the challenging times of the depression era, Verla, at the age of 5 was raised by her maternal grandparents until their passing. She then lived with an aunt’s family in Holdrege, Nebraska attending high school there. She married LaWarren Nelson in 1947 and they had three children, Janet, James and Joyce. They later divorced. She married Maynard “Doc” Taylor in 1966. Doc and Verla had four sons, Mark, Michael, Matthew and Monty. Doc passed away in 2003.

Verla possessed many talents. As well as raising her families over the years, Verla worked a variety of jobs from custom making draperies in her younger years to caregiving for the elderly when she, herself, was well into her 70’s & 80’s. She truly enjoyed visits from her children and grandchildren.

To order memorial trees or send flowers to the family in memory of Verla D Taylor, please visit our flower store.

Family will receive family and friends from 6 PM to 8 PM at Robson Funeral Home, Hugoton.