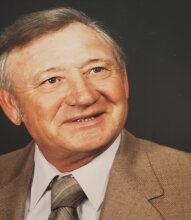 He attended grade school at the Faye Country school and Hugoton High School.

Wade was a World War II veteran, only one percent of the 16 million WW II veterans are still alive. In January 1945 he volunteered for the U.S. Army to fill the Stevens County draft quota and in exchange the high school principal gave him his high school diploma a semester early.

Wade was a child of the “Dirty Thirties" growing up on a Stevens County farm. His
mother became ill when he was seven and was not able to stay in the home or
care for her family. Wade Depp always referred to the years growing up on the
farm as “baching” with his dad and two older brothers, Lloyd and Bronston. He
always gave his brother Bronston credit for raising him. Wade learned at an early
age to cook, do his laundry, and be responsible. As he said, “there was no one at
home to make my bed or pick up my clothes.” Wade's sense of accountability,
decorum, and dress through the years reflected what he had learned at an early
age. One would always see him dressed in a fresh pressed dress shirt and khakis.

On August 4, 1946, he married his high school sweetheart, Maryruth Parker at the
Methodist Parsonage in Hugoton with Rev. W. Karlowski presiding. Wade was still in the Army and so they moved to San Antonio where he was stationed at Fort Sam Houston.
After being discharged from the Army, Wade attended Wichita Falls Texas College
studying gemology and watchmaking repair. In 1948 Wade and Maryruth
moved back to Hugoton. Wade worked at Porter Drug repairing watches. In 1949
his father-in-law, C.T. Parker convinced him to farm on the old Parker Ranch,
Wade always said as a young man he would never return to farming, but that first year he raised a bumper crop of milo and became hooked on farming.
Three daughters were born to Wade and Maryruth: Shelley Depp, Marigail and
Bethany Lee. Life became very busy with happy years of farming, and raising and
educating three daughters.

During this time period, Wade built a little “Redwood” cabin in his garage in panels and hauled it in a farm truck to Cuchara, Colorado. The three daughters have happy memories helping their dad panel and hammer and even build the first bridge across Dodgeton Creek.
Wade retired from farming in 1995. Both before and after retirement Wade and Maryruth enjoyed many travels to the Southwest and Mexico. Travels often included their daughters and granddaughters. They also enjoyed traveling with Maryruth’s first cousin, Carlyle Grage and wife Florence. Another of their best traveling companions would be one of their many beloved Standard Poodles: Giddy, Sam, Casey or Eureka. A familiar sight in Hugoton would be Wade driving his white Cadillac with Eureka in the passenger seat.
Wade had a very dry sense of humor. His advice to his family was delivered in a direct yet kind way. His grandchildren all received his funny poems in the mail accompanied by his famous pig drawings.
Wade was devoted to his family and a disciplined hard worker, to the point that Maryruth had to remind him to take a break and have a good time. His family was proud of how he managed the family farm, his home, and daily business in the later years of his life.

Wade was a member of the Hugoton United Methodist Church, serving on several church boards. He was on the Stevens County Hospital Board and a charter member of the Santa Fe Trail Association.
He was proud of his French Huguenot ancestors and belonged to the Huguenot Society. He chose to have the Huguenot Cross, the cross of Languedoc, etched on his tombstone to honor his French Protestant ancestors.

He was preceded in death by his wife of sixty-five years, Maryruth Parker Greenwood in 2011, sons-in-law Robert Bloomer and Robert Thomas, brothers Lloyd and Bronston and great-grandchild Gabriel Vaughan.

Graveside service will be held Saturday March 12, 2022, at 11 AM at the Hugoton Cemetery with Pastor Wes Young presiding.
To order memorial trees or send flowers to the family in memory of Wade Depp Greenwood, please visit our flower store.