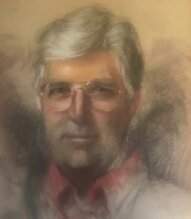 Warren was a World War II Veteran and was proud to have been of service to his country. He earned his Bachelor of Science in Petroleum Engineering from KU and received his diploma at 90 years young. Being an entrepreneur, Warren’s first passion was farming. An avid pilot, he flew extensively across the region for work and pleasure. Warren loved to play golf and was a long-time member of Forewinds Golf Course. Above all, he enjoyed spending time with his family and friends, especially when he could share his passion for and knowledge of Jayhawk basketball.

Warren was preceded in death by his parents, wife, siblings, and nephew.

A memorial has been established at the Hugoton Animal Shelter. Memorials may be mailed to Robson Funeral Home, P.O. Box 236, Hugoton, KS 67951.

Visitation will be Thursday, September 5, 2019, 10 A.M. to 8 P.M., Robson Funeral Home, Hugoton, KS.
Graveside services will be held on Friday, September 6, 2019 at 10 AM at the Hugoton Cemetery, Hugoton, KS.
To order memorial trees or send flowers to the family in memory of Warren W. Spikes, please visit our flower store.