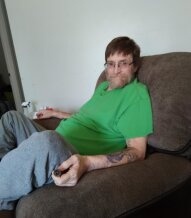 He was born to John and Virginia (Annis) Allen on November 21, 1962 in Allentown, Pennsylvania. His parents preceded him in death.

William and Karen Osborn were married June 6, 1987 in Ulysses, Kansas.

William was raised in Ulysses by his parents. His hobbies included anything to do with fishing and hunting. He enjoyed spending time with his family and had two very special dogs.

He is survived by his wife, Karen Allen, Elkhart, KS.; son, Justin Dahle and wife Joelle, Moscow, KS.; two grandchildren, Christopher and Gary; great-niece, Izzy Osborn; and many other relatives and friends.

Cremation has taken place and entrusted to Robson Funeral Home, Elkhart. There will be no public services.
To order memorial trees or send flowers to the family in memory of William James Allen, please visit our flower store.