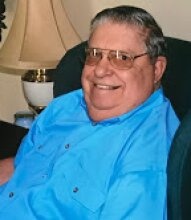 Henry was the son of Paul and Nola Ann (Brooks) Pence. He was born on October 19, 1938 at home in Doniphan, MO. He moved with his parents to Rozel, KS when he was 8 years old.

Henry met Gloria June Oetken in the Winter of 1957. They were married on August 29, 1959 at Peace Lutheran Church in Albert, KS. After they were married, they made their first home in Larned, KS. where he worked for Larned Grain.

Henry and Gloria soon after moved to Dighton, KS, where Henry became the manager of Dighton Grain. During this time, they began building their family and added 3 children, Lenise Ann, Kirk William and Carla Lynn. After 7 years of managing Dighton Grain, he was offered the management position of Collingwood Grain at Ryus, KS. So, Henry, Gloria, Lenise, Kirk and Carla along with their dog, Taffy and cat, Tiger loaded up and moved to Satanta, KS. Satanta became their home of 52 years, raising their 3 children and enjoying their grandchildren and great grandchildren.

Many years later he then began a new venture of owning Henry’s Sanitation. Oh, how the grandkids loved riding the trash truck with him.

Henry enjoyed traveling with his family. As a family they traveled and camped in many states and made many unforgettable memories. After his children were grown, He and Gloria joined The Good Sam’s Camping Club, (wheatbelt Sam’s). They traveled and camped along with their friends to many places around Kansas and surrounding states.

He also enjoyed hunting, fishing and teaching his children and grandchildren the enjoyment of these activities. But most of all he was an avid Kansas City Chiefs fan. GO CHIEFS!!

Henry was a member of Grace Lutheran Church and the American Legion of Satanta. He was a past member of Satanta Chamber of Commerce.

Henry was preceded in death by his parents.

Graveside service, open to the community, will be held on Friday, January 29, 2021 at 2 P.M. at Dudley Township Cemetery, Satanta, KS.

Friends may call Thursday, January 28, 2021 from 10 A.M. to 8 P.M. at Robson Funeral Home, Satanta. Family will be receiving friends and family from 6 P.M. to 8 P.M. at the funeral home.
To order memorial trees or send flowers to the family in memory of William Henry Pence, please visit our flower store.

The church service is private. Please join us at the Dudley Township for a public graveside service.